Can’t always be peaches and cream...

Well it’s been one of those weeks that Irene and I would like to forget. We started the week in Kansas City with a hop across the river to St. Louis picking up a load bound for San Antonio Texas. After dropping the trailer in San Antonio we were told to head to Midland Texas where we would relay with another driver and take his trailer on through to Ontario California. This was the beginning of our downward spiral. The load was 5 hrs. late…no problem, caught up on some much needed sleep. Once we received the trailer we weighed it and it was overweight. We went to El Paso Texas and spent all day waiting for our freight division to rework the load to make it legal…after 2 attempts we were on our way, but way behind. After all we had been through already we still managed to deliver on time. We had received our next planned load which was to run from Los Angeles to Illinois…after a few minutes we received a message stating the load was cancelled and we were given a different run from Calexico California to Missouri. We were 5 miles from our pick up when we received a cancel on that one and were told to head to San Diego to relay with a truck that had broken down and take his trailer to El Paso Texas. Well the 1st run we lost was 2400 miles the 2nd one we lost was 1400 miles and the final one we received was 700 miles. Miles means money and 700 is not much. Needless to say we were not very happy and after a very disgruntled phone call to dispatch from myself we were on our way. About an hour later Irene received a call from the manager of dispatch who was very sympathetic to our unhappiness. That said a lot to Irene and I that he would call and tell us he would do all he could to make things right…and he did…with in a couple hours we received our next planned load that would take us from El Paso Texas to Marion Ohio…1700 miles…now that’s better…we ended the week with just over 5000 miles. A little short from what we like to run but hey freight is slow right now so we will not complain. We are currently sitting in a truck stop in Columbus Ohio waiting to pick up our load a few miles away then heading out to Laredo Texas for a nice run…back to where it’s warm…we saw a little of that nasty white stuff they called snow on the way here so we wanted out ASAP…we have been spoiled since moving to NC.

I know when I write I usually pick on something Irene has said or done in the past week…and I will get to that, but I need to tell you of my bone headed move this past week. We had a pickup at a customer and the loading dock was in a very tight area that was downhill to the dock. After several attempts I finally managed to get it to the dock so they could load us. When it was time to pull away Irene asked me if we would make it up the ramp…I laughed and said of course. As I let out the clutch the tires began to spin and we did not move…Irene looked at me and said now what? I tried 2 more times and we just sat and spun…it was about that time I noticed I had the truck in reverse…I very smoothly put it in 1st gear and pulled out…Irene asked what was the problem…I couldn’t lie…I could tell by the look on her face she wanted to call me “DORK” but all she could do was laugh. Okay now my turn…while heading down I-70 through Missouri Irene glanced over at a building that had several hundred boats parked outside…she says to me, “why would someone order so many boats with the economy the way it is”…he will never sell them…Ahhh Irene, that’s the factory I told her…oh that explains it then…I had to laugh.

We are presently on the lookout for our remote to the TV…this truck is not very big inside but we manage to lose a lot of things…we know it’s here…just not sure where. Super Bowl Sunday and I am blogging…something wrong with this picture…not even sure who is winning. Actually I don’t want to fight Irene for the TV…lol. Well time to run and get ready to head out of here…Stay tuned!
Posted by Randy Bridge at 8:50 PM No comments: 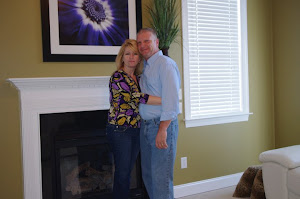